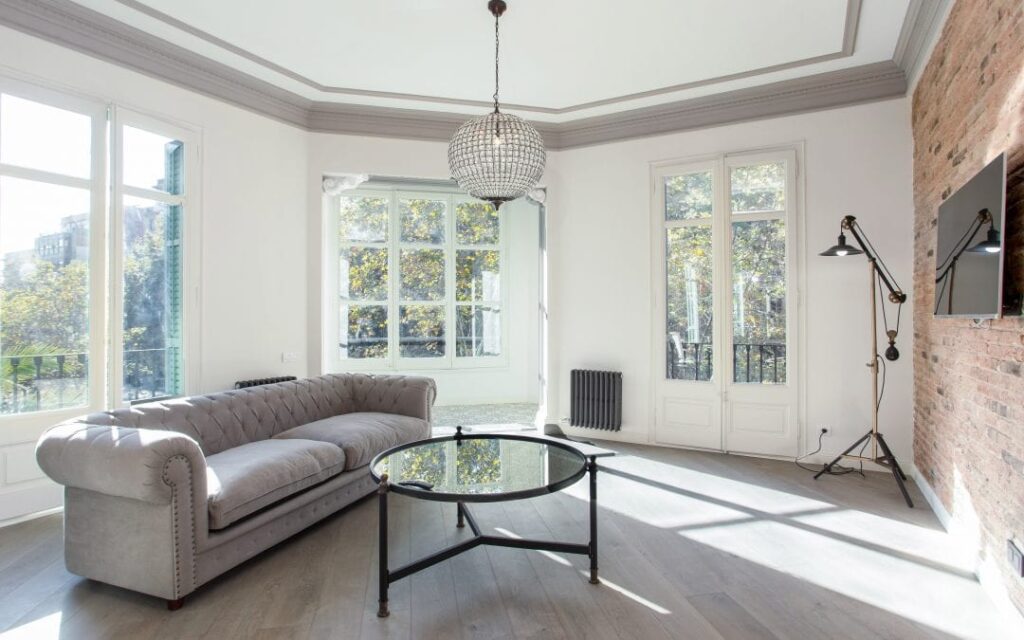 Choosing one of the neighbourhoods in Eixample as your home can be a very wise decision, as they are geographically privileged places due to their location in the city centre. Which gives them access to different touristic places and important squares, theatres, cinemas, hotels, and many places for entertainment.

Eixample district design origin
Eixample is an area of approximately 7.5km2, occupying the centre of Barcelona, representing the most populated district in this city and in all of Spain. Turning it into an important economic, social and cultural centre.

It was designed in the mid 19th century by engineer Ildefonso Cerdá, who gave it the appearance of a grid, with orthogonal buildings. With equality as the common denominator of its design, for people and vehicular transit as well as its comfort, offering many accesses to the buildings and dwellings.

They all have different particular attractives in their buildings, however, they also have common characteristic in their designs that makes them easy to recognise, such as hydraulic pavements, mouldings in the ceilings, and ample spaces with natural light.

If you own or you’re thinking of acquiring a home in one of these neighbourhoods, renovating in El Eixample is the best option. As they are buildings over 100 years old, they need an adequate upkeep and to modernise their appearance. Without it losing its essence and the modernist style that characterises them.

Said attractive is directly related to the concept of their façade and their interior, whose origins are in the urban and rural, combined with the palatial and popular. Giving it a very pleasing image which spans all tastes.

That’s why in every reform or renovation done to them, we must keep in mind the original elements of their architecture:

– Mouldings in walls and ceilings

The different models of mouldings in ceilings and walls of these constructions are one of their main attractions, as they show figures of a different epoch which give elegance to their surroundings. When we renovate these dwellings, it’s important to retouch or, if needed, restore these mouldings, so the essence of their architecture isn’t lost.

This kind of floor used to be widely used in former eras, and it’s a fundamental element in the architecture of these homes.

Said pavements have characteristic mosaics in pleasing and happy colours, with tones according to their ambience, these artisanal tiles are the symbol of Catalunya’s 19th-century modernism. Thus, when you do renovations in Eixample, don’t forget to restore these floors.

The architectural concept present in the homes of Eixample offers areas with large spaces which are very well ventilated and enjoy natural sunlight.

This way the ambience inside the home turns enjoyable, giving a certain feeling of freedom. When it’s time to do renovations, it’s very important to maintain these environments, as they’re a part of the minimalism of the era.

Wood is another element which is always present in these buildings, especially its doors, which show designs from the year 1900.

We mustn’t overlook this magnificent opportunity to own a piece which today has become a classic. When you do renovations in Eixample, you should try not to change their designs, restoring or substituting them for similar models are the best options.

Renovating a space in Eixample is an activity that should only be done by companies with experience in the area, to avoid damaging the architectural essence of the era. Restoring and modernising what already exists is key to achieve a home which is elegant, striking, comfortable and at the same time has that antique touch so widely used today.